By Jongwon Lee, The Korea Daily

Editor’s note: This is the English translation of the original story, which was first published in Korean for The Korea Daily. This version has been updated and edited, with permission from the author(s) and publication(s), for length and clarity.

PALISADES PARK, NJ — It was an unexpected knock on the front door.

When K. Lee opened the door, he found a Census enumerator standing by the doorstep. At first he felt uncomfortable, and he thought, “My English is not very good, how will I be able to communicate well?”

But the enumerator politely introduced himself, Lee said. He assured him that the interview was going to be short and quick.

Lee, a long-time resident of Palisades Park, could not believe that the Census taker talked to him in English and asked a few questions that were all answerable by “yes or no, a number or a letter.”

As the U.S. Census Bureau enumerators have begun going door-to-door in New Jersey, Lee, like many other Koreans in the state who didn’t respond to earlier communication attempts, unexpectedly found how easy and manageable the Census interview was.

“I was surprised when I saw a guy wearing a mask and standing at my front door. He was practicing social distancing, too, and so it made me feel safe,” Kim said. “It took only three or four minutes for me to fill out the questionnaire. There was definitely no need to worry even if the person’s  English skills were not good.”

Census enumerators have started knocking on doors since August 11. They are required to show their valid government-issued ID, with their photo and the U.S. government watermark.

“Don’t worry, the enumerator will ask you five questions for each person living in your household. The interview should take about 10 minutes, and  your answers will be kept confidential,” said Lisa Moore, assistant regional Census manager for the U.S. Census Bureau. “If no one is at home, the enumerator will leave a notice with information about how to respond online, by phone or by mail.” 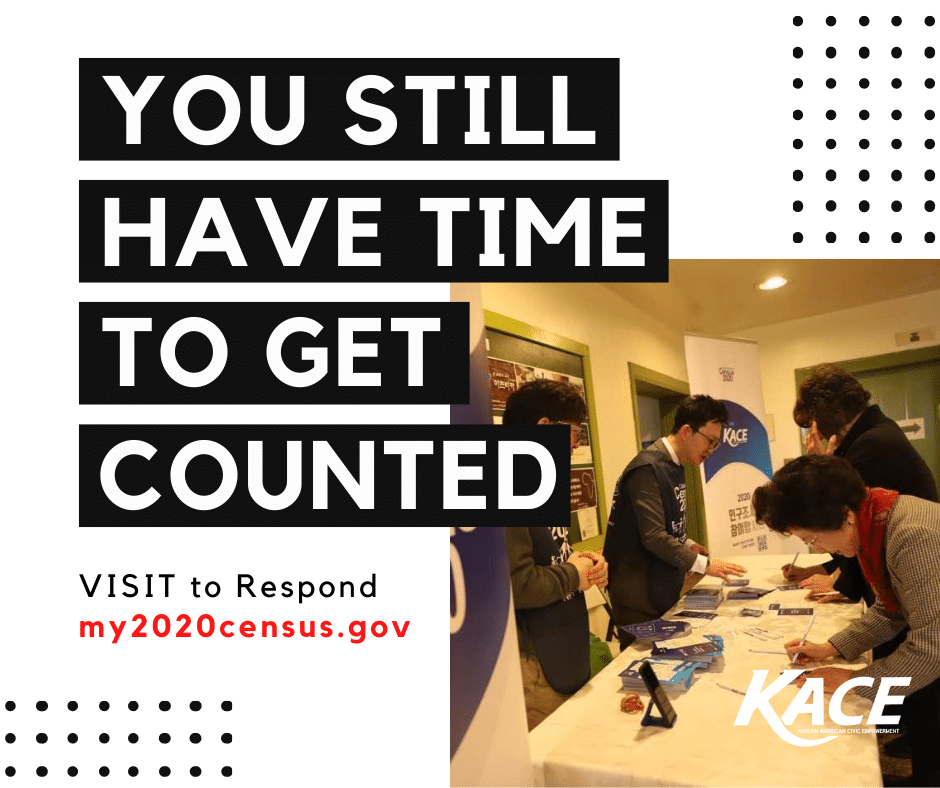 “I understand some Koreans are afraid of talking to a stranger because of COVID-19. But it is mandatory for all Census takers to wear a mask and maintain social distancing,” he said.

In case the household still missed the enumerator’s visit, the 2020 Census questionnaire is still available online.

“Even if you did not receive a letter or Census ID, it is OK. Visit https://2020census.gov/ko and select the link that says, ‘If you do not have a Census ID, click here.’”

Field data collection is scheduled to conclude by Sept. 30, a month earlier than the original deadline.

Recently, Korean community leaders and advocates in the area have drummed up the Census efforts.

While New Jersey has over 70 percent response rate, which is higher than the national average, many Koreans in the Garden State still have not responded to the 2020 Census.

For example, in Palisades Park, the response rate last week was recorded at 60 percent—which was 20 points behind its final 2010 rate.

“Many Korean seniors have no internet access and do not speak English. They are afraid of being contacted by a stranger. They still need in-person assistance,” said Rev. Hak Kim, director of the Senior Center at Asian Women’s Christian Association.

Kim and a number of volunteers hosted a “Census Push Week” at Park Town Hall on August 13. They handed flyers and provided instructions to Asian immigrants on how to fill out a Census questionnaire.

Kim urged Koreans to cooperate with the Census enumerators.

“We need more hospitals and emergency services in the time of this pandemic,” he said. “Responding to the Census ensures that my community and your community will have the needed resources for our schools, hospitals, and roads in the next 10 years.”

This story was part of the 2020 Census: New Jersey Media Counts program, an initiative of the Center for Cooperative Media at Montclair State University.

Joe Amditis is the associate director of the Center for Cooperative Media at Montclair State University. He can be reached via email at [email protected] and on Twitter at @jsamditis. View all posts by Joe Amditis